I enjoyed my brief appearance on Corinium Radio talking about some of the inspiration for my novel Inspector Hobbes and the Blood (published on 26 July 2013). Here is a little more background on my book's characters. 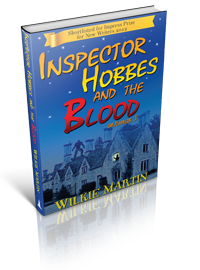 Alan Titchmarsh as inspiration
The initial inspiration for Inspector Hobbes came from seeing a television programme in which Alan Titchmarsh, made up to look like a Neanderthal, walked through a busy street. If I remember rightly, only one person, a young woman, really noticed him, and stared for a moment. This gave me the idea that Neanderthals, or possibly individuals from some other branch of the human tree, might still exist, living in our midst, generally unremarked. Then, one evening, sometime later, I visited a local video store, where a family renting videos struck me as so strange in their manners, appearance, and speech that it brought the Titchmarsh Neanderthal, and the concept that they are still among us, back to mind.
Shortly afterwards, Inspector Hobbes came to life as a character in a short story. He, concealed behind the façade of a police detective, was not quite human, being of extraordinary strength, and having retained certain animal characteristics and senses. People hearing the story seemed to find the character appealing, so I wrote a couple more, playing around with the character. Although these went reasonably well, I thought they weren't really going anywhere, but that Hobbes might be able to sustain a novel.
And Sherlock Holmes
An early problem was that I found I was unable to get into his mind, in the same way I would be unable to comprehend what is happening in the mind of, say, a dog. Although I could have used a third person narrative form, I thought about the Sherlock Holmes stories, being a fan of them. In these, since Holmes' thought processes are obviously so different to those of normal people, Conan-Doyle used the device of a narrator, Dr Watson, to carry the story. I decided to do something similar, and Andy Caplet became my narrator. Since I needed a reason to get Andy involved with Hobbes, I made him a local reporter. Andy's name came from an old photograph I'd seen of composers Claude Debussy and Andre Caplet together. Debussy was large and hairy, a bit like I imagined Hobbes, whereas Caplet appeared small and insignificant. As the novel developed, Andy, struggling against his many flaws, became the central character.
Mrs Goodfellow, the eccentric, tooth-collecting housekeeper, appeared fully formed, and apparently out of nowhere. She just seemed to be essential, and the sort of woman who would look after and care for an outsider like Hobbes. As for Dregs, Hobbes's big, bad dog, I wasn't sure why he appeared, but knew he was necessary. Even so, it was only as the plot worked itself out that I understood why.
Other characters, particularly the non-human ones, developed from the sort of people Hobbes, would know. After all, if you accept the possibility of one non-human being living in town, it is a small stretch to accept there may be others, even if they are not all the same, and mythic beings may have had some basis in fact. The plot developed from these characters, as well as those Andy knew. I made up the word unhuman to describe Hobbes, rather than using inhuman, which carries connotations of cruelty.

I set the action in and around Sorenchester, a fictional Cotswold town. All the characters and the locations in the book are entirely fictitious, arising from my own warped mind.
At the end of Inspector Hobbes and the Blood, realising there was still potential for stories with Andy, Hobbes, Mrs Goodfellow and Dregs, I began the, now completed, second book in the unhuman series, Inspector Hobbes and the Curse, and am now editing the third in the series.

Inspector Hobbes and the Blood is published by The Witcherley Book Company on 26 July 2013. It is available in paperback (ISBN: 978-0-9576351-0-4 £7.99) or kindle (ISBN: 978-0-9576351-1-1 £4.99) and is available from amazon, or it can also be ordered from bookshops. As well as amazons worldwide it is being distributed by Adlibris.com, Bertrams, Blackwell, Book Depository, Coutts, Gardners, Mallory International, Paperback Shop, Eden Interactive Ltd., Aphrohead in the UK and worldwide, and by Ingram, Baker & Taylor, Barnes & Noble in the US. It will also be available to createspace resellers (https://www.createspace.com/pub/l/createspacedirect.do?rewrite=true).

Subscribe to my newsletter for updates on my books, or for details of special offers and discount codes https://wilkiemartin.com/wp/newsletter
Posted by Wilkie Martin at 20:27